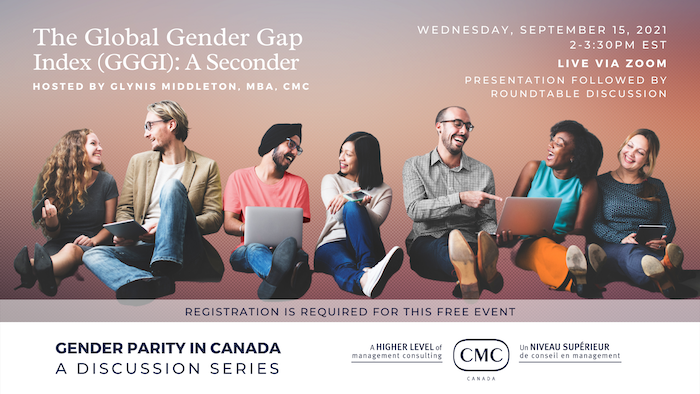 Please consider joining us for the second session in our Gender Parity Series on Wednesday, September 15. More details here, we hope to see you there!

As the weather cools and kids go back to school this Fall 2021, many of us are wrestling with the uncertainty of the continuing COVID-19 pandemic. We in Canada are facing a federal election in a few weeks and wrestling with our political values – what we need to see from our political leaders, lawmakers, and policy shapers in the pending term. I hope that our candidates will bring all of themselves to their roles. When I talk about “bringing all of themselves,” I’m talking about bringing themselves as parents, siblings, workers, earners, immigrants, farmers, urbanites, female, male, LGBTQ2+ community members, white, black, brown, local or global citizens. Whatever aspects make up a person’s lived experience, contributes to their worldview and shapes their approach to public policy.

This concept of the many aspects that make up a person’s lived experience is, in sociological circles, currently referenced in the theory of INTERSECTIONALITY. As one notable feminist has said: “Intersectionality draws attention to invisibilities that exist in feminism, in anti-racism, in class politics, so obviously it takes a lot of work to consistently challenge ourselves to be attentive to aspects of power that we don’t ourselves experience.” Here, I want to explore what intersectionality is, what it means to the Gender Parity issue in Canada, and what one might consider in addressing intersectionality in the diversity, equity, and inclusion space.

WHAT IS INTERSECTIONALITY
Back in 1989, Kimberlé Williams Crenshaw, an American lawyer, civil rights advocate, philosopher, a leading scholar of critical race theory, and full-time law professor, introduced the theory of how overlapping or intersecting social identities interact with systems and structures of oppression, domination, or discrimination. (Adewunmi) Intersectionality may include multiple factors of advantage and disadvantage such as gender, race, class, sexuality, religion, physical appearance, physical ability, or even height.

When a person falls into several minority categories at once, the solutions and systems created to address the needs of one minority group may overlook or further confound the needs of another. For example, as policies are developed to increase the involvement of women in wider circles of economic opportunity, if those circles are only available to women educated in English-language curriculums alone, then the needs of our francophone or immigrant women may be unintentionally excluded from these economic opportunities.

Similarly, as post-secondary communities focus on increasing the participation of female enrollment in STEM (science, technology, engineering, and mathematics) education, they may fail to account for other systemic obstacles like socio-economic inequities, secondary education biases, or cultural barriers that keep young women from making that brave leap into uncharted territories. These are only a few examples of the potential tests to inclusivity in diversity matters that arise when considering policy change surrounding gender parity work in Canada.

WHAT DOES ONE DO ABOUT INTERSECTIONALITY
In response to the question of “what can I do?”, YWBoston suggests five tips for more fully incorporating intersectionality into one’s social equity work. They are:

Here are my thoughts on how that affects this work to bring gender parity to Canadian society.

To RECOGNIZE DIFFERENCE, one must be willing to invite others’ perspective in conversation, in writing, and even in disagreement. As individuals, we each hold certain views of the world of work around us. How willing are you to engage in conversation with another who sounds or appears different from you?

To AVOID OVERSIMPLIFIED LANGUAGE, one must be willing to examine one’s own approach to speaking. As someone who is known to use “a $20-dollar word when a $5-dollar one would do,” I am sometimes challenged by others to explain what I mean. In explaining my meaning, I may make the mistake of oversimplifying and condescending to another. I make the assumption that the other is not understanding my word choice due to ignorance or lack of education. And you know what they say about assume (it makes an a$$ of u and me). Don’t paint all with a single paintbrush – don’t assume one’s own point of view is the universal reference point.

When one ANALYZES THE SPACE ONE OCCUPIES, you communicate a willingness to be introspective, open to change, and to have embraced the value that an equitable society has for all members of that society. Be willing to look around and notice when certain diverse experiences are missing from one’s circle. If your local sports franchise has no people of colour or aboriginal presence, be willing to ask why. If your current board is entirely made up of white, Anglo-Saxon males, be willing to seek out other demographics. I know that we are all seeing an increase in the diversity and inclusion language in our workplaces but does your firm only employ professionals from a certain part of the country, who only “fit the culture,” or went to “elite” universities? Take stock of the practices your organization employs to welcome (or distance) newcomers.

Empathy is a universal word for “walking in another’s shoes.” It is the number-one character trait engaged when we SEEK ANOTHER’S POINT OF VIEW. When we humbly seek to understand another’s experience from behind their eyes, we communicate value in that individual’s experience. This does not require one to be in agreement with another’s opinion but only open to understanding it. In this age of almighty Google, if you need clarity on a concept or specific identity, it is an easy step to explore another’s opinion, culture, religious or workplace practice. If an internet search doesn’t answer your point of curiosity or absence of knowledge, refer to the first point – engage with a different viewpoint by asking a question.

Now is the hard part – SHOW UP! Stand up and be counted amongst those willing to include others for the betterment of all. This work of social equity, particularly that of gender parity, needs people from all walks of life willing to advocate, lobby, and engage policy makers in order to accelerate change towards gender parity in Canada. 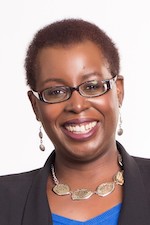 Glynis Middleton, MBA, CMC is a consulting professional who specializes in strategy, finance, business planning, and business process improvement. Her dynamic business career started in banking and transitioned into consulting for private and public enterprises.

Glynis has influenced billions of dollars through development funding, economic impact analysis, and planning in a wide variety of sectors including arts and culture, commercial and institutional construction, health, municipal planning, not-for-profit and for-benefit, oil and gas, retail, and urban development. She is a respected leader and mentor. Glynis has a passion for social justice and is seeking change for the better.

1. Adewunmi, Bim. "Kimberlé Crenshaw on intersectionality: "I wanted to come up with an everyday metaphor that anyone could use"." 02 Ap 2014. NewStatesman.com. Last accessed 02 Sep 2021.